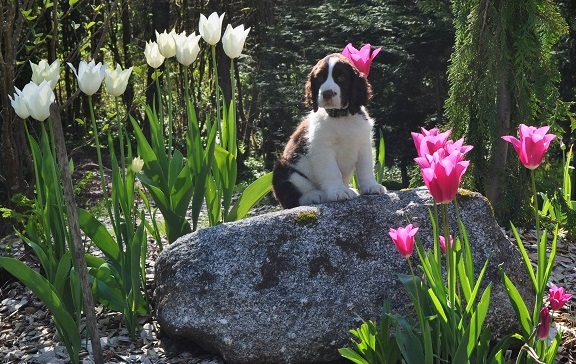 We have added a new greeter to our staff! As he is new to the job, he will be undergoing several weeks of training to learn how to approach all our visitors in a professional and friendly manner: no jumping, no barking, and certainly no licking faces to tell you profusely how happy he is to see you. While Mosby, our former greeter, is still sadly missed, Tu’s youthful spirit is a joyful addition to our household and the White Raven team.

Many years ago, when the buildings at the Stumpfarm were just in their dream stage, we looked at adding solar power. Unfortunately, at the time, it would not have been cost effective nor attractive. Technology has come a long way since then. This week brought us some pretty inspiring (open source!) technology: the Tesla Powerwall, a surprisingly small, wall-mounted battery that can be placed inside or outside. Alone, it can be used as an automatic backup generator. Its real strength though, is its integration with home-generated solar energy. With solar panels on your roof, you can essentially run on live solar power during the day and battery-stored solar power at night.

Instead of the expensive, huge array of solar panels and an unsightly, noisy generator, today you can put in roofing solar panels (or wind generators, presumably) and this compact, silent battery with a much smaller cash outlay. As a long term investment plan, this may be worth looking into further – eliminating the cost of power bills. Both the U.S. government and Washington State offer tax payer incentives for solar energy systems.

A modest increase in consumer spending has recently surfaced although overall the U.S. continues to report soft economic data and U.S. companies have reported relatively weak earnings for the season so far. Richard Bernstein Advisors, as reported in Business Insider, indicates that the market is reflecting those earnings and is fairly valued. The previous strong U.S. dollar did affect the earnings of several major internationally diverse U.S. companies. As you can see from the previous, a strong dollar does not necessarily mean a strong economy. Roland Jackson of Yahoo News recently wrote about how commodity prices reflect the change in the dollar, which in turn may reflect the U.S. Federal Reserve rise in interest rates. The chance that the Fed will raise rates in June appears to be slim; chatter on the news leans toward a possible rise in rates pushed to September. In the latest Schwab Market Perspective, the team of Liz Sonders, Brad Sorensen and Jeffrey Kleintop discuss the soft economy and the relative chance of a June rate hike. The article also discusses how the U.S. consumer has been timid and the impact this has had on economic growth. They felt that the present course for the market would generally be a slow grind higher with increased volatility. The article included some reminders similar to what we often state: diversification is essential, commensurate with risk tolerance, of course. The possibility of a correction still exists.

The market in April was a lot like the weather, first some record highs and then returning above the March plateau. The blue-chip barometer (the DowTR)* tacked on .54 percent, remaining in the black year-to-date for April month-end. The S&P 500 Index (SPXTR)* rose .96 percent. Lastly the tech-rich Nasdaq Composite (COMPTR)* edged up .83 percent. The S&P Case-Shiller 20-city composite Home Price Index showed a slight uptick with the month of February reporting a 5.0% increase on a year-over-year basis. Month-over-Month data increased significantly with the month of February increasing 0.5% over the month of January for the 20-city composite index.

*Indexes are unmanaged and do not reflect service fees, commissions, or taxes. You cannot invest directly in an index. Past performance is not necessarily indicative of future results. Returns for the DOW and the S&P500 are total returns from Pershing Netx360. Return for the NASDAQ is the NAV total return provided by Morning Star as of 2015April30