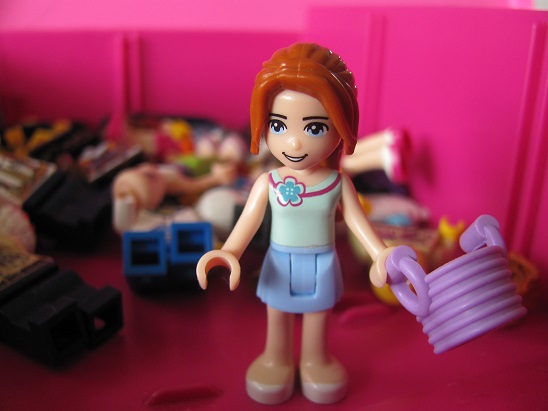 Typically, these blog entries come from Diane’s perspective and relate to what’s happening around the White Raven Financial offices. Not so this time. Down below the equator in New Zealand, where it’s summer, Kris has spent the last two months of summer vacation immersed in a world of Lego. While that might not come as a surprise to anyone who knows she has a seven-year-old son, it might surprise a few of you that her three-year-old daughter spends just as much time building and playing with Lego. She got her first Lego set that she could build herself this Christmas, and it didn’t disappoint. The Lego Friends supermarket she built (all by herself!) went along perfectly with the swamp police station her brother had –criminals needed to steal the money from the cash register and be caught.

Apparently the marketing of Lego to girls has been very successful. But what does Lego have to do with investments? According to the figures, a fair bit. Time Money sets out that Lego Sets Have Been a Better Investment than Gold Since 2000. That’s certainly something to think about next time you’re perusing the toy store shelves. We haven’t done any comparisons on the value of other collectables in relation to gold, but the articles caught our eye on pure interest factor.

Out of the land of Lego and into the markets . . .

January saw a strong U.S. dollar, a rise in manufacturing inventory and a plunge in oil prices; these were some of the factors that led to the month’s down turn. Amidst all of this, retail sales at toy stores accelerated; it appears toys and games are inversely correlated to fuel prices. With the latest rise in Fed interest rates, Pimco, in its Putting Markets in Perspective article, addressed how a moderately improving economy could be helped by the advantage of a tempered approach in rising rates. According to Bank of America Merrill Lynch, headwinds from an appreciating U.S. dollar, the transitioning Chinese economy, and inventory overhang are weighing on growth. The impact of this slowdown has been seen in industrial sector data. However, leading indicators of economic activity suggest only a slowdown, not a downturn or recession.

Internationally, negative interest policies have been adopted by Japan which joins Denmark, Austria, Switzerland and Sweden. The assumption behind negative interest rates: they will provide an incentive for banks to lend and consumers to spend. Many of you are aware of China’s devaluated currency and many fear there may be more weakening of the nation’s currency in the future. To provide a twist on that scenario, according to Bloomberg News, China has been increasing its import of gold from Hong Kong as it seeks to “diversify its reserves”. Thoughts are that they may be anticipating further weakening in the nation’s currency. Blackrock’s Global Chief Investment Strategist, Russ Koesterich, CFA, in his early February blog, mentioned that European stocks are benefiting from a strong start to the earnings season – above the historical average. Koesterich also mentioned that investors can expect more of the acute market swings to continue. This sentiment appeared to be echoed by other investment strategists as well. A number of them felt that market volatility would continue until the economic uncertainty abates and the noise dissipates. Benjamin Gramham, a famous investor, once said “The individual investor should act consistently as an investor and not as a speculator.” Keep calm and invest on.

January found the major indexes looking as if they were trading in lock step with oil (many of us wished the pumps showed those low lows) and brought more volatility with it. The blue-chip barometer (the DowTR)* started the year in a slump and reported a negative 4.96 total. The S&P 500 Index (SPXTR)* also fell and reported a negative 5.39. The tech-rich Nasdaq Composite (COMPTR)* plunged to the lowest note by posting a negative 7.82. The S&P Case-Shiller 20-city composite Home Price Index showed that home prices continue to rise across the country. The month of November reported a 5.8% increase on a year-over-year basis. Month-over-month data increased slightly with the month of November reporting 0.01% over the month of October for the 20-city composite index.

*Indexes are unmanaged and do not reflect service fees, commissions, or taxes. You cannot invest directly in an index. Past performance is not necessarily indicative of future results. Returns for the DOW and the S&P500 are total returns from Pershing Netx360. Return for the NASDAQ is the NAV total return provided by Morning Star as of 2016January31