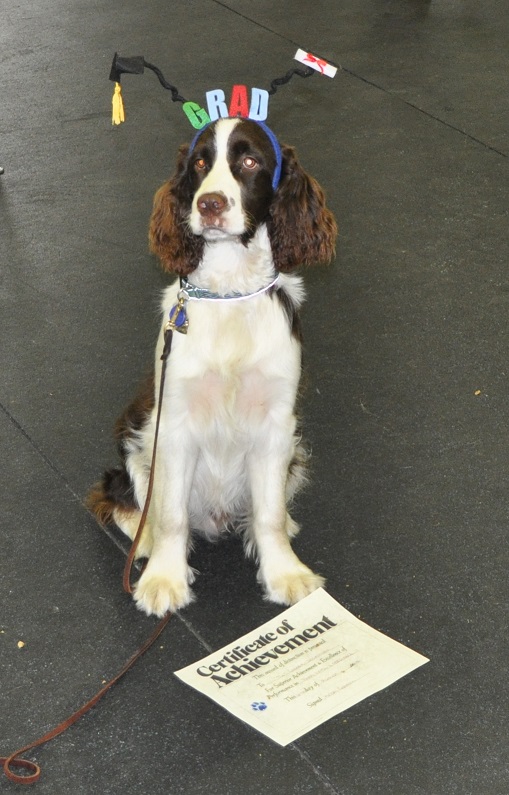 Amidst all of the drama that the Chinese market fluctuations have caused, Tu graduated from his first class of doggy school. He may not look ecstatic in the photo (who would, wearing that silly headband) but we were proud of him. Our official greeter is well on the way to becoming a valuable asset to the White Raven Financial team; he can sit on command and come when called, although he’s still working on keeping his paws to himself. More important than those skills is what’s behind them – as a family we are all happier being able to communicate.

That’s the thing, isn’t it? No matter the ups and downs of the market, the economy, the world, it is our families that we come back to. Whether it’s the family we’re born to or the one we’ve created ourselves, we weather the tide through the support of our loved ones.

Keeping a balanced perspective amidst the volatile economic and political challenges is key to good decision making. Domestically the Volcker rule took effect during the recent market gyrations. The Volkner Rule requires big banks to abstain from proprietary bets which should help with the soundness of the system. To help calm the slower-than-expected economic growth worries, European Central Bank (ECB) President, Mario Draghi, indicated the bank is prepared to expand its quantitative easing program if needed (9/3/15). In Lord Abbett’s end-of-August perspective, featured strategists suggested readers should look at the fundamentals and realize that the Chinese economy is not imploding as one might suspect from the recent sharp stock declines. Additionally, they added that China does not define the financial condition of the United States – the U.S. is continuing to show signs of ‘modest’ growth. Affirmation of the U.S. economy’s strong position can be found in the Reuters article titled “Shrinking U.S. trade gap shows economy’s underlying strength“. Many market strategists and chief investment officers discussed the market correction in their blogs, indicating that there may be continued volatility in the both the U.S. and China, particularly as we wait for the September Fed meeting on interest rates. The recent Charles Schwab Perspective reaffirmed several of those thoughts; with the additional thought that they ‘do not believe’ that it is a sign of a global recession. That is good news!

As we all know, August ended the month with the bears in control. The blue-chip barometer (the DowTR)* ended one of its worst months in years and dropped 6.36 percent. The S&P 500 Index (SPXTR)* surrendered 6.03 percent for the month. Lastly the tech-rich Nasdaq Composite (COMPTR)* fared the worst and backpedaled 6.69 percent. TheS&P Case-Shiller 20-city composite Home Price Index showed that home prices were basically unchanged from last month ? they continue to rise. The month of June reported a 5.0% increase on a year-over-year basis. Month-over-month data increased positively with the month of June 1.0% over the month of May for the 20-city composite index.

*Indexes are unmanaged and do not reflect service fees, commissions, or taxes. You cannot invest directly in an index. Past performance is not necessarily indicative of future results. Returns for the DOW and the S&P500 are total returns from Pershing Netx360. Return for the NASDAQ is the NAV total return provided by Morning Star as of 2015August31