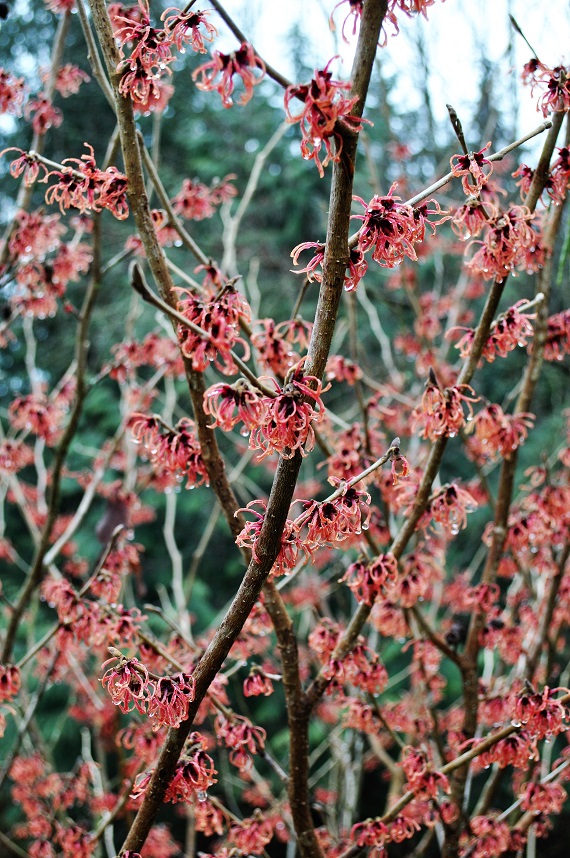 For those of you that stopped by the office in January, you might have glimpsed two different witch hazels in full bloom (the blooms will last through most of February, so if you’re coming in to our office soon, you won’t have missed them). One of our witch hazels has bright red flowers and the other has sunshine yellow flowers. Their spicy fragrance and beautiful color provides a nice contrast to these gray and often wet days. The Telegraph has a great article about this Magical Plant for Winter.  For those of us here in the White Raven Financial office, it offers an enticement to take a walk outside and see if we can peek any other natural displays of the color in amongst the browns and greys of winter. Along the nature path to the west of the office, I’ve found false lily of the valley red berries peeking out beneath fallen leaves.

Wintertime can be rough for many of us. If we let it, the power of nature can provide a kind relief to cure our lethargy. Florence Williams, in her recent WSJ article To Fight the Winter Blues, Try a  Dose of Nature, wrote about a study that was conducted by British environmental economist George MacKerron. The ‘Mappiness study’ found that people were significantly happier outdoors, especially in natural settings (surprised?!). It appears that even small doses of urban nature can not only affect our moods and well-being but also our thinking ability, memory, focus and creation.

Back in the world of economic reality, we find Change. A word that seems to characterize what has been happening in the U.S. for the past several months. Uncertainty about the pace of rising interest rates, global trade, and financial regulation are all highlighted daily in the news. Manufacturing is continuing to expand; the Manufacturing ISM index for January came in at 56.0% which was stronger than expected. The ADP report on February first also came in higher than expected. Both are indications that inflation may be gathering steam. Larry Pugila, Portfolio Manager for T. R. Rowe Price, in his executive summary wrote why he felt that the U.S. stock market could be favorable for 2017. Nuveen’s chief equity strategist Bob Doll also indicated why he thought that stocks would outperform bonds in the first half of 2017 in his popular yearly predictions on the economy and the markets.

Navigating A World In Transition was the title for American Funds 2017 Outlook. In the preceding outlook, they explained why despite political and economic uncertainty, some European companies are flourishing and may be attractively valued. They continued their thoughts on how emerging markets appear to be rebounding. Russell Investments, in their 2017 Global Market Outlook, wrote why their global investment strategists felt that we may have an investing roller coaster. They also wrote that near term they expected global economic growth to improve.

We reiterate our oft mentioned thought: A balanced diversified portfolio should help mitigate the risk of economic and market concerns.

The U.S. stock market began the year on an up note; a nice tone for the beginning of 2017.  The blue-chip barometer (the DowTR)* began the year below one percent and posted a .6% gain. The S&P 500 Index (SPXTR)* tried to make two percent but missed the mark at 1.9%.  The tech-rich Nasdaq Composite (COMPTR)* outperformed and started the year at 4.35%. The S&P Case-Shiller recent report showed that prices continue to rise across the country. The 20-city composite November Home Price Index came in with a 5.3% year-over-year gain; October had posted 5.1%. Before seasonal adjustments, month-over-month data also showed a fraction of a gain with the month of November posting a 0.2% increase over the month of October for the 20-city composite index.

*Indexes are unmanaged and do not reflect service fees, commissions, or taxes. You cannot invest directly in an index. Past performance is not necessarily indicative of future results. Returns for the DOW, S&P500 and the NASDAQ is the NAV total return provided by Morning Star as of 2017January31