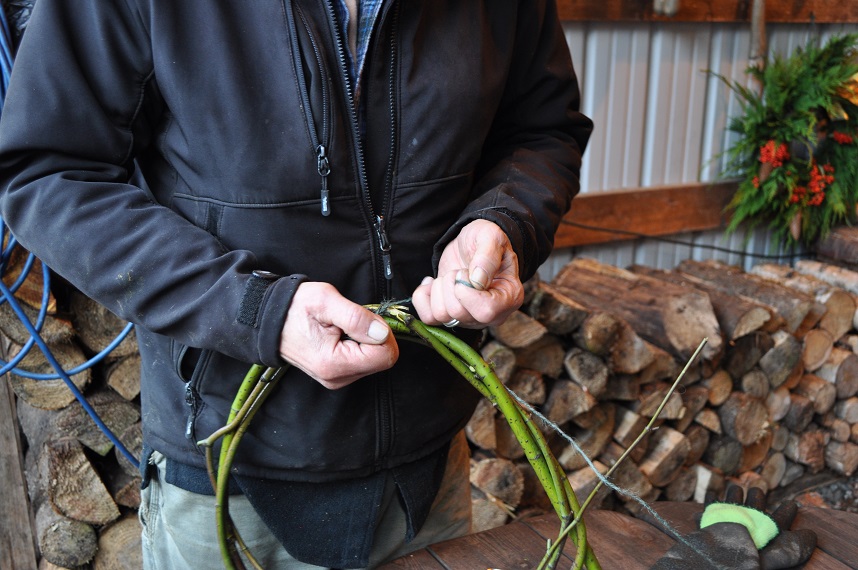 Save the date: our annual wreath making party will be taking place on Sunday, December 6th. The newest member of the White Raven Financial team, Kirk Schwarz, will be there. Come along and meet him, if you haven’t already. Whether you’re a newbie to wreath-making, like Kirk, or returning to make your latest masterpiece, we’re looking forward to seeing you amongst a little holiday cheer.

For our wreath making event, we get together all the bits and pieces that are needed to create a wreath, and put them in front of you to fashion something uniquely beautiful. We hope you have a bit of fun in the process. Music composition can apparently be approached the same way. A game called Compose Yourself is designed to engage children who may have little or no experience playing a musical instrument in the act of composing. It enables children (or those of us who like to play kids’ games) to create music using the building blocks of Western harmony. The game’s success is apparently due, in large part, to the fact that the musical results sound exceptional. Professional musicians recorded the fragments at London’s Abbey Road studios and the fragments fit together seamlessly once you’ve created your composition.

Now that you’re waiting in anticipation of making wreaths, or music, it’s a good time to mention that waiting for the long anticipated interest rate rise was fruitless – it didn’t happen, again. Year-to-date, interest rates have changed very little and are practically range bound. We will now wait again to see what the Fed will decide in December and how they view the U.S. and global economy. The U.S. economy ‘appears’ sound: More people are working, inflation has been modest, housing purchases have continued and interest rates are low – historically low. Allianz Global Investors team of Kristina Hooper, Steve Malin and Greg Meier recently wrote that even with the latest Growth Domestic Product drop in the third quarter, consumer spending remains robust. Not only are we consumers spending on ‘things’, we are also spending on services.

Overseas, the European economy appears to be slowly healing with continued monetary stimulus from the European Central Bank. China looks to be experiencing a slowdown which is affecting Australia and New Zealand. As China is now considered the world’s second largest economy, many are hoping for a soft landing rather than a major financial crisis. In October’s Market Perspectives by Ivy Funds, the authors discussed the multi-year slowdown that has occurred in China and how other countries had previously become reliant on Chinese demands. They also discussed the possibility of a temporary bounce in economic activity.

The major indexes decided to show green in October; a nice fall color addition. The blue-chip barometer (the DowTR)* paced forward at 8.7 percent for the month bringing it into the black for the year. The S&P 500 Index (SPXTR)* kept the digit pace by reporting an 8.4 percent gain. And the tech-rich Nasdaq Composite (COMPTR)* stepped lively with a 9.4 percent increase for the month. The S&P Case-Shiller 20-city composite Home Price Index showed that home prices (again) continued to rise nationally. The month of August reported a 5.1% increase on a year-over-year basis. Month-over-month data increased slightly with the month of August 0.37% reporting over the month of July for the 20-city composite index.

*Indexes are unmanaged and do not reflect service fees, commissions, or taxes. You cannot invest directly in an index. Past performance is not necessarily indicative of future results. Returns for the DOW and the S&P500 are total returns from Pershing Netx360. Return for the NASDAQ is the NAV total return provided by Morning Star as of 2015October31