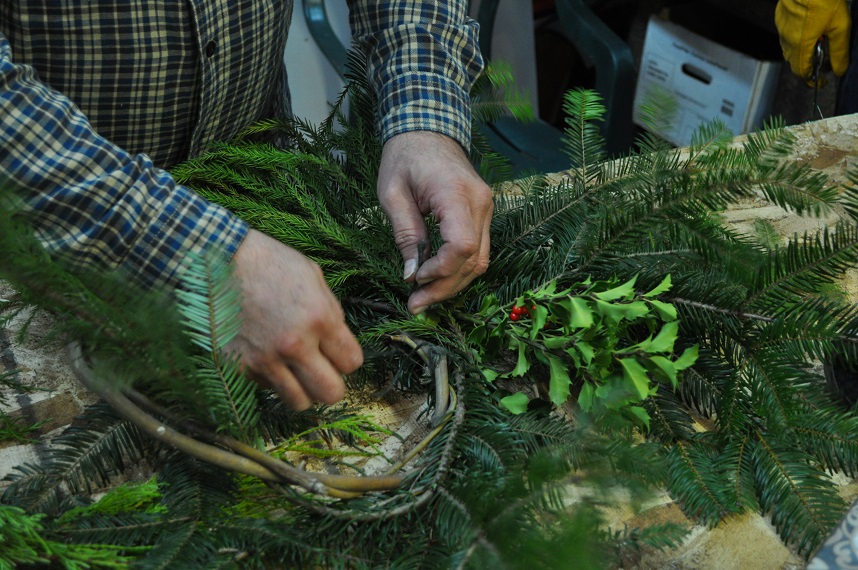 Thanks to all of you who helped with and attended our wreath making event this year. Wreath building techniques were shared from experienced attendees to novices as bows, ribbons and natural elements were used to make unique arrangements.  Besides making some beautiful wreaths to take home or give as gifts, we made some great wreaths that we donated to the Arlington Assisted Living Center. We also donated a total of 69 pounds to the Arlington Food Bank. Photos of the donations are on our LinkedIn page here and photos of the event are up on our website here.

This year Diane was doubly fortunate; she had two Christmases! She spent Christmas day with Kris in New Zealand, flying out on Christmas night, only to arrive back in Washington on Christmas morning to do it all again with more of her family at home. And while we may enjoy many wonderful things about the holiday season: spending time with our family, eating delicious food, giving gifts to those we care about, at times we can also find the season a bit stressful. Does two Christmases make it twice as stressful? Not necessarily, she can attest! But there are moments when all need a bit of a breather, and apparently, coloring in the lines can be a great stress buster. How many of you received an adult coloring book this Christmas?

Outside of the holidays and into the economy: There have been low unemployment levels in the U.S. but that did not appear to translate to inflation and growth. The Institute for Supply Management (ISM) reported that its gauge of manufacturing activity fell to 48.2 in December from 48.6 in November. Note that a reading below 50 indicates the sector is contracting. The strong dollar, weak global growth, and excessive inventories are some of the factors that have weighed on the manufacturing sector. A nice contrast to the afore mentioned worry is the report by real-estate research service Reis Inc. that showed U.S. employers leased additional office space in the 4th quarter of 2015 – more than any other quarter since the 3rd quarter of 2007. In a recent market perspective, Lord Abbett stated that U.S. growth rates may not be stellar, but at least they are maintaining a slow and steady pace in the right direction. Blackrock’s Global Chief Investment Strategist, Russ Koesterich, CFA, in his early January weekly commentary recapped that Blackrock has only modest expectations for U.S. equities in 2016 and would not expect a revisit of double-digit returns.

International strife and economic data are again in the headlines and it almost feels like déjà vu from some of 2015. The focal point was again on Middle East politics (Iran and Saudi Arabia) and weak economic data out of China which affected international and the U.S. stock markets. Additionally, at the end of 2015 International Monetary Fund (IMF) Managing Director, Christine Lagarde, made headlines and slowed the markets when she predicted that growth, on a global level, wouldn’t be stellar in 2016. Lagarde pointed to the prospect of higher U.S. interest rates and an economic slowdown in China as potential sources for the expected economic woes.

The major indexes finished December with some seasonal reds and ended the year on a low note. The blue-chip barometer (the DowTR)* was status quo for December and finished the year in the tenth of a percent range to the green with a .06 total. The S&P 500 Index (SPXTR)* back paddled -1.58 for December and also finished the year in the green with a 1.38 percent – thanks to its dividends.  The tech-rich Nasdaq Composite (COMPTR)* sung a low note in December showing a loss of -1.93 but sung a high note for the year by posting 6.88 percent. The S&P Case-Shiller 20-city composite Home Price Index showed that home prices continue to rise. The month of October reported a 5.5% increase on a year-over-year basis. Month-over-month data increased slightly with the month of October reporting 0.06% over the month of September for the 20-city composite index.

*Indexes are unmanaged and do not reflect service fees, commissions, or taxes. You cannot invest directly in an index. Past performance is not necessarily indicative of future results. Returns for the DOW and the S&P500 are total returns from Pershing Netx360. Return for the NASDAQ is the NAV total return provided by Morning Star as of 2015December31