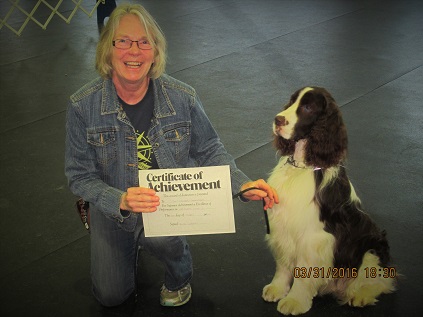 Tu passed another level of doggy classes and we’re proud of his achievement. We hope that all his upskilling is having a positive impact on your client experience. Do you feel that he’s greeting you cheerfully with a modicum of self-restraint when you arrive at our offices? Does he listen and respond to requests with aplomb? We hope so!

While Tu’s accomplishments are significant in our backyard, we’d also like to highlight some wonderful people achieving truly great things for all of us on earth at the moment. Calvert Investments, which takes a stewardship-based approach and analyzes companies based on non-financial information, including their environmental, social, and governance factors, as well as evaluating financial data and information, has sponsored three young women to take part in the International Antarctic Expedition 2016. Calvert Investments partnered with Robert Swan and the 2041 Foundation with the goal of engaging and inspiring the next generation of leaders to take responsibility to help build resilient communities. It is exciting to see how one investment management company looks at responsible stewardship – of finances, of society and of the environment.

Jumping subjects to the current market, the U.S. purchasing managers’ index (PMI) grew in March. This is the first time in six months. Why are we excited? The PMI is often considered a forward-looking indicator. Yahoo News posted several largely positive comments from purchasing managers.

On March 18th, famed Wharton finance professor Jeremy Siegel commented on CNBC’s “Squawk Box” about March’s S&P 500 rally (you can find a link to Siegel’s comments on Squawk Box in this article). Sigel mention that he had his eye on oil and the dollar as the two stabilizing – or destabilizing – forces on market behavior. He further mentioned that he thought that S&P 500 earning could improve as much as 15% this year ‘if’ stability continues. Further comments on the economy came Warton Fed Chair, Janet Yellen, when she spoke before the Economic Club of New York on March 29th.  In her prepared remarks, Fed Chair cautioned that only gradual increases to the fed funds rate will likely be warranted in the coming years. However, Chair Yellen stated that if economic conditions improve faster than expected, then tightening may be warranted.

As we are all so painfully aware, due to last month’s Brussel’s attacks the global impact of terrorism has been rising steadily since 2010.  The Fed Chair warned of tightening economic conditions and risks to the global economy. The Eurozone is not catering to the news, but there are concerns with the lack of accelerating expansion. On the other hand, there appears to be expansion in China: figures from the National Bureau of Statistics (NBS) show Chinese manufacturing expanded for the first time in 9 months – an upside surprise.

Following this month’s U.S. daylight savings time change the major indexes also did a ‘spring forward’ in March. This brought most of the indices into positive territory for the year. The blue-chip barometer (the DowTR)* soared 7.2% and brought it into the green for the year. The S&P 500 Index (SPXTR)* climbed 6.8% for the month also bringing it to the green for the year.  The tech-rich Nasdaq Composite (COMPTR)* moved forward 6.94% but still shows a negative for the year. The S&P Case-Shiller 20-city composite Home Price Index in January show a 5.7% year-over-year gain – a repeat of December. Before seasonal adjustments, month-over-month data remained the same with the month of January unchanged over the month of December for the 20-city composite index.

*Indexes are unmanaged and do not reflect service fees, commissions, or taxes. You cannot invest directly in an index. Past performance is not necessarily indicative of future results. Returns for the DOW and the S&P500 are total returns from Pershing Netx360. Return for the NASDAQ is the NAV total return provided by Morning Star as of 2016March31.