A New Bridge for a New Year

Home » Financial Blog » A New Bridge for a New Year 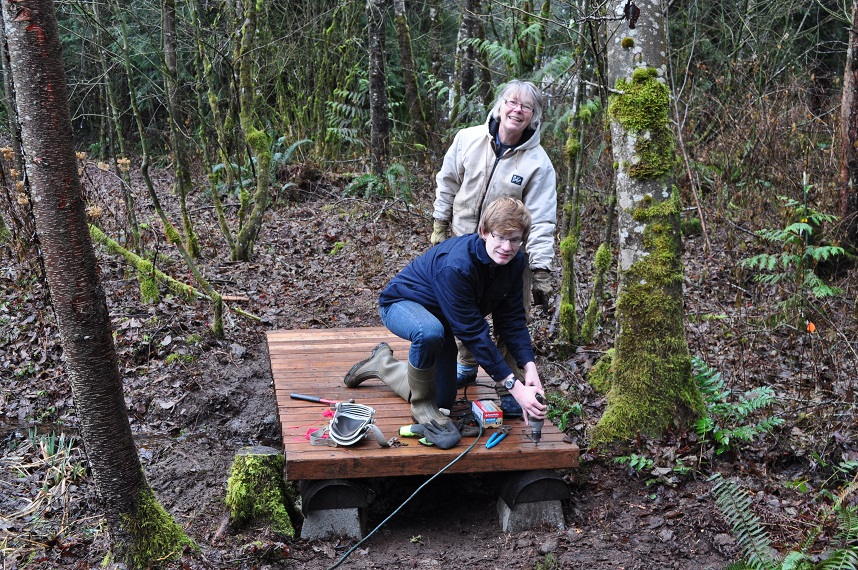 For those of you who missed it, the wreath event photos are up on our website here.

Now that you’ve admired them (go on, do it!). . . . Most of us begin each new year with a bit of reflection and a bit of planning, often thinking about things we have accomplished and things we want to accomplish. And of course, at White Raven Financial, we looked back at 2014 with our business hats on (as opposed to our party hats!). We could recap the year in the market for you here, but so will a hundred other writers on a hundred other websites (here’s one if you’re interested). Instead, we’ll share with you one little story from the year gone by and how it evolved to strengthen our purpose in the new year.

Sometime in early 2014, when the sun was shining, after the rain had fallen and made the streams on the Stump Farm flow with water and the leaves glisten bright green, I went for a walk in our little woods with a client. As we strolled along and chatted, we came to a stream that couldn’t be easily leaped over. We were forced to turn back and head another way, leaving that part of the forest unexplored. As the year went by, I thought about that stream, and came to the conclusion that I didn’t want to stop exploring where my clients might want to go (we’re now speaking figuratively and literally here). I decided that before the year was through, a bridge would be built over that spot. As you can see from the photo, Mike and I had a bit of help from our grandson, Matthew, in constructing the bridge. So now, as 2015 begins, our progress forward (through the woods) is unimpeded. Our goal remains the same: listening to our clients and helping them along the path they want to follow, including the removal of obstacles and building of bridges. I’ll stop with the metaphors now.

In December 2014, not everyone was outside in the cold constructing things. Authors of blogs, webinars and articles were busy sharing their insights and perspectives for 2015 domestic and international markets. 2015 started with oil declining further (crude futures had a 46% annual drop in 2014) resulting in a cautious Wall Street. Greece’s announcement of a snap election resulted in renewed fears of a potential Greek exit from the Eurozone and the dollar rebounding, leaving many with a mixed reaction. Amongst the material I viewed and read recently, a cautious outlook on fixed income was the resounding theme, along with reports of divergent paths for the developed capital markets. Chief Investment Strategist Liz Ann Sonders at Charles Schwab shared that 2015 could bring more volatility to the market but that the secular bull market in the U.S. is still intact. She and her team provided several key points to support their analysis although they did mention they felt that the US was in stage three (mature) out of the four stages for their definition of a bull market. WSJ columnist Nick Timiraso interviewed several economists to deliver his outlook for 2015. The overall consensus is that the U.S. economy is among the world’s best off as 2015 begins. Risk versus return and a proper allocation is the first page on T. Rowe Price’s investing 101, a very important reminder for any type of market.

The market for December ended mostly on a lower note. The blue-chip barometer (the DowTR)* showed a .16 percent gain from the prior month with the help of dividends. The S&P 500 Index (SPXTR)* recorded a negative -0.25 percent for December. Lastly the tech-rich Nasdaq Composite (COMPTR)* retreated the most with a -1.1 percent but advanced the highest for the 2014 year.

Please do not hesitate to call us if you have any questions and/or concerns. Feel free to forward this link to friends, family and acquaintances or contact us if someone wishes to be added to the monthly distribution list.